Thanks (again) to Geekdad for posting another great geeky thing which looks like a lot of fun. Brickquest is essentially a HeroQuest-like game where a group of players traverse a 3D tabletop dungeon in search of monsters to kill and rob. I wasn’t fully sold on the idea until I saw some of the photos of the boards which the designer has created from his awesome collection of LEGO, for example: 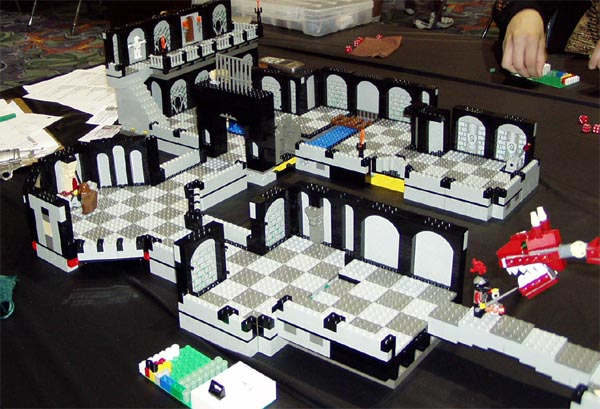 I doubt the average LEGO collection would go nowhere near having enough pieces to come close to something as cool as that, I even think my efforts using the LEGO I kept from when I was a kid may just be able to emulate a floorplan like that but it would look like some kind of clown explosion of mixed blocks and colours. Still, it looks like a great idea and best of all, it’s free! (download the PDF game manual here)

Is it possible to charge your iPod via the USB cable on a PC without iTunes installed?

Yes, but it’s tricky and not obvious.

My opinion on iTunes is well known, it’s a pig. It runs slow and uses a lot of memory in windows, if I could find an alternative which actually worked and didn’t mess with the iPod music database I’d use it. I’ve tried Music Monkey, the Foobar plug-in and a bunch of other stand alone apps, none of them worked as well as iTunes does to just move music to the iPod in an orderly fashion, it’s just a shame iTunes turns any machine I install it on a chugging, disk thrashing heap of crap.

I encountered this problem recently which took me a while to solve so I figured I’d share. You want to be able to charge and play music from your iPod on a PC without iTunes installed? If you plug the iPod in via USB the PC will detect and mount it, the iPod will go into to “sync” mode and you can’t use it. Instinctively you’d think that using the “Safely Remove Hardware” window would unmount the iPod so you can use it, and it does, but once unmounted the iPod will not continue to charge via the USB connection.

Here’s the trick to keep it charging and usable while connected via USB:

Right click over the iPod drive mounted under Windows Explorer and select EJECT.

All that text just for that hint? Exactly how this is different to “Safely Remove Hardware” is unclear, but it doesn’t actually seem to unmount the drive, just makes it inaccessible. The only gotcha is that if the PC you are using is a badly earthed noisy piece of shit like the dell I use you’ll hear all sorts of high pitched bullshit coming from the iPod while the hard drive is spinning up and down and it’s plugged in via USB.

In other news, my replacement keyboard and mouse finally turned up, the MX-3100 was upgraded to the newer, fancier (Bluetooth and an LCD screen)  MX-5500 Revolution, so I’m a very happy camper.